By Brian Carey, The Sunday Times 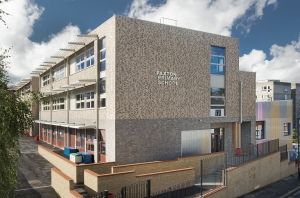 Bluebay is to extend finance to Kardomagh, which is controlled by management led by Ray Doyle, to buy out fellow shareholders. Executive chairman Hanratty holds shares directly in Extraspace and separately in Kardomagh.

He joined the business in 1993, having been finance director of Cambridge Asset Finance, a once-quoted leasing company. Hanratty also spent a brief sabbatical as commercial director of Leinster Rugby. He and O’Buachalla also have substantial property interests.

Hanratty will receive €5m for his shares in Kardomagh alone, although part of that payment will be in the form of loan notes.

Extraspace makes high-quality modular buildings, mostly for the education and healthcare sectors. It built the Venue, a “semi-permanent” concert venue in Derry, for the city of culture year in 2013. The venue hosted exhibitions and concerts including a show by former Girls Aloud singer Nadine Coyle. Extraspace recently completed a school in Lambeth, south London, in just six months. The school has a design life of 60 years.

The company had a turnover of €45.8m in 2015, an increase of more than 33% on the previous year. It made a profit before tax of €3.2m. Extraspace derives most of its revenue from the British market.

Goals Football
DunPort are delighted to have supported the founding management team of Goals Football in their recent buyout of...
Read More

Trinity Homecare
DunPort are delighted to announce our participation in a club deal alongside Shawbrook Bank, to support Trinity Homecare,...
Read More

Rephine
DunPort are delighted to have provided debt facilities to support Kester Capital in its acquisition of Rephine Ltd....
Read More

DunPort | EasyGo
DunPort Capital are delighted to have provided EasyGo with growth capital to fund an expansion of its electric...
Read More

This website uses cookies to improve your experience while you navigate through the website. Out of these cookies, the cookies that are categorized as necessary are stored on your browser as they are essential for the working of basic functionalities of the website. We also use third-party cookies that help us analyze and understand how you use this website. These cookies will be stored in your browser only with your consent. You also have the option to opt-out of these cookies. But opting out of some of these cookies may have an effect on your browsing experience.
Necessary Always Enabled
Necessary cookies are absolutely essential for the website to function properly. This category only includes cookies that ensures basic functionalities and security features of the website. These cookies do not store any personal information.
Non-necessary
Any cookies that may not be particularly necessary for the website to function and is used specifically to collect user personal data via analytics, ads, other embedded contents are termed as non-necessary cookies. It is mandatory to procure user consent prior to running these cookies on your website.
SAVE & ACCEPT